Genius Consciousness is not a bad nootropic at all. It comprises a large dose of AlphaSize Alpha-GPC to increase focus and information processing, a very generous serving of Tyrosine to raise dopamine levels, and lots of Lion’s Mane Mushroom to stimulate neurogenesis. However, there’s simply no need for these outrageously large serving sizes. The rest of the formula is useless waste, while the Huperzine A means the stack needs to be cycled on and off regularly, which is less than ideal. Better nootropics are available, but Genius Consciousness is not a bad option. But beware; the caffeine content means it is definitely not for everyday use!

Several ingredients are backed by hype not hard scientific evidence

Methylliberine may cause side effects, especially in conjunction with caffeine

Caffeine content and Huperzine A make this unsuitable for daily use

What Is Genius Consciousness?

Here is the Genius Consciousness ingredients list as it is displayed on the label:

In case that image doesn’t load, here’s a complete list of all Genius Consciousness ingredients with doses:

We’ll now go through each ingredient in Genius Consciousness, explaining what it does (or supposedly does), what the scientific literature has to say, and what we make of the dose. AT the end, we’ll give you our verdict on the formula as a whole.

Acetyl-L-Carnitine, or ALCAR as it is more typically known, is thought to increase mitochondrial efficiency. In other words, people believe that it helps you mitochondria release energy from food. Lots of very vague and nonsensical claims get made along these lines, like “ALCAR helps your muscles burn fat”, and so on.

While ALCAR may well improve energy metabolism, there is little evidence that it has a noticeable effect on athletic performance. There is certainly no convincing evidence that ALCAR consumption enhances cognitive performance. We don’t think ALCAR has any place in a nootropic.

Alpha-GPC is a highly-effective cholinergic. It rapidly increases choline levels in the brain, leading to higher levels of acetylcholine, which is the brain’s main executive neurotransmitter (the one active in learning, speech, and muscle activation). AlphaSize Alpha-GPC is a standardized, potent, highly-bioavailable form of Alpha-GPC. Genius Consciousness gives us 600mg per serving, which is HUGE! While there is no real need to take more than 300mg of Alpha-GPC per day, there are few side effects associated with taking 600mg per day.

Tyrosine is one of our favorite nootropic substances. This amino acid has been shown to dramatically improve cognitive function in people placed in situations which normally impair memory, focus, decision-making, and learning. For example, supplementing with Tyrosine was found to improve cognitive performance in people deprived of sleep, as well as people placed in extreme cold. This is an ideal substance to add to your daily stack if you regularly need to be mentally sharp while under acute stress.

Genius Consciousness gives us 500mg per serving, which is a lot of Tyrosine. It is actually more than you need to see results, but with such a good side effect profile, more is better here!

Methylliberine might sound like an exciting new nootropic substance, but we think this ingredient has been chosen for marketing reasons rather than because it works. Methylliberine is an extract from the kucha tea leaf that is more commonly known as Dynamine. According to the makers of Dynamine®, methylliberine has a molecular structure “similar” to theacrine. They say it is “thought” to act in a “similar” way in the body.

We probably don’t need to explain to you how ridiculous these statements are; just because a molecule looks like it has a similar structure does not mean it behaves the same way in the human body. Needless to say, methylliberine has never been properly tested on humans to see if it does have the same effects as theacrine (which has very limited effects anyway). We’d rather Genius Consciousness dropped this untested filler!

Caffeine is a pretty phenomenal nootropic. It quickly reduces the perception of fatigue, sharpens focus, increases motivation, and boosts mental energy. But the issue with including caffeine in a supplement like Genius Consciousness is that it is unsuitable for daily supplementation, especially at 100mg per day!

NeuroFactor is definitely a fashionable nootropic right now, but we don’t think this popularity will last. NeuroFactor is a whole coffee fruit extract. According to the nootropics manufacturers who use this stuff, polyphenols found in NeuroFactor can drastically increase the production of Brain Derived Neurotrophic Factor (BDNF). BDNF regulates the growth of many brain cells. More BDNF is better if you want to optimize brain function.

The problem is that there have been no conclusive, independent studies showing whole coffee fruit extract as having a significant effect on BDNF levels. The only trials we’ve seen have been sponsored by the manufacturer of NeuroFactor! It’s a shame to see a nootropic like Genius Consciousness include unproven ingredients like this!

Panax Ginseng is a common nootropic ingredient. While it is an effective supplement for vitality and general wellness, it is pretty unimpressive when it comes to improving measurable aspects of performance. Ginseng is a great addition to a general health and wellness stack, but a nootropic it is not. We have never seen a clinical trial showing big improvements in focus, memory or mood from ginseng supplementation – certainly not at 50mg per day! Another less than impressive ingredient in Genius Consciousness.

Genius Consciousness is marketed as a daily nootropic but it is not suitable for long-term daily consumption.

In terms of delivering increased focus, improved working memory and better verbal fluency, Genius Consciousness is definitely effective. The massive dose of Alpha-GPC will take care of short-term, immediate cognitive function. At 600mg per day, the Alpha-GPC in this nootropic will deliver drastic improvements in executive cognitive performance.

With Huperzine A thrown into the mix, Genius Consciousness will definitely drive up focus and information processing for everybody.

But if you want a stack that provides long-term, lasting cognitive enhancement, Genius Consciousness is not the nootropic for you. While it does contain many ingredients which deliver long-term improvements in memory, focus, and learning, the fact that Huperzine A needs to be cycled means you will not really benefit from these ingredients.

Ingredients like Lion’s Mane Mushroom need to be taken every day for many weeks to see benefits. You cannot take Genius Consciousness every day for several weeks without experiencing side effect from the excessive Alpha-GPC and Huperzine A combo.

The same goes for the caffeine – taking 100mg of caffeine every day for several weeks will cause problems. This means you’ll never see the full benefit of ingredients like phosphatidylserine and Lion’s Mane Mushroom.

Then there’s all the useless ingredients: methylliberine is completely unproven, as is NeuroFactor. Neither has been found to deliver actual cognitive enhancements in independent clinical trials.

All things considered, Genius Consciousness looks like a good nootropic for short-term brain boosting, but not so good for long-term, lasting enhancements.

If you want total brain optimization, you need to take a long-term, consistent approach to supplementation.

There are better stacks out there than Genius Consciousness for that! Check out our top rated nootropic to see the difference.

Genius Consciousness side effects: Is it safe?

There are, unfortunately, some pretty substantial side effect risks with Genius Consciousness. 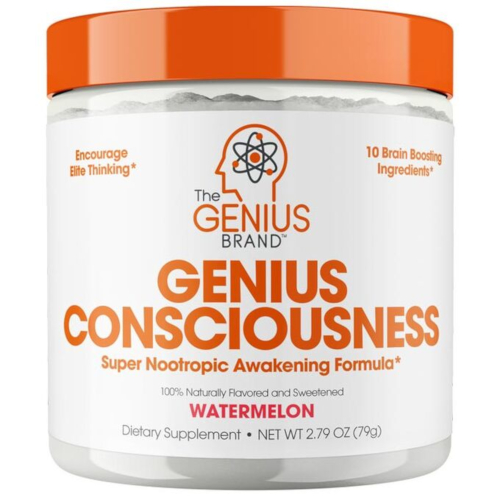 Caffeine is one of the main concerns.

Consuming pure caffeine every single day is almost inevitably going to cause side effects, including:

Chronic over-consumption of caffeine leads to lots of chronic problems, including an increased risk of heart disease and dependency issues. We strongly advise you to be careful when supplementing with caffeine. Caffeine is an extremely powerful stimulant; even the 100mg in Genius Consciousness can cause serious side effects.

Huperzine A is also a serious side effect risk here. Huperzine A should not be in a nootropic like Genius Consciousness; one designed for daily, long-term use. As discussed above, Huperzine A causes a build-up of acetylcholine in the brain. While this is good for a short time, eventually acetylcholine levels will get so high that they cause problems.

Taking Huperzine A for several days without break, or taking too much at any one time, will cause an excessive build-up of acetylcholine.

Common side effects experienced when acetylcholine levels get too high include:

Please take these considerations into account before Genius Consciousness. If you are sensitive to caffeine – or any stimulants – then it is probably best to avoid this brain supplement altogether.

This is not medical advice, and we are not doctors. You must do your own research carefully and if you have any concerns whatsoever about Genius Consciousness’ ingredients, talk to a qualified medical doctor before you use it.

Is Genius Consciousness worth the money? Is it really one of the bets nootropics in the world?

We don’t think so. If you have read our full review of Genius Consciousness, you’ll know that we think there are some very good aspects of this brain supplement, but many more drawbacks.

Genius Consciousness provides a massive serving of Alpha-GPC; 600mg of highly bioavailable AlphaSize Alpha-GPC to be exact. This will rapidly improve focus, information processing, and working memory. We also get other solid, proven nootropics – Lion’s Mane, Phosphatidylserine, and Huperzine A.

Despite this major selling point, we wouldn’t recommend Genius Consciousness.

There are several ingredients in Genius Consciousness that are completely unproven. Methylliberine has never been shown to enhance cognition, and NeuroFactor’s evidence has all been funded by the manufacturer. The use of caffeine means it is unsuitable for everyday use.

Another issue is the Huperzine A. You need to cycle Huperzine A to avoid serious side effects, but regular cycling will render things like Lion’s Mane Mushroom and Phosphatidylserine ineffective.

Genius Consciousness is not the best option if you’re looking for total brain optimization. You’ll see short-term improvements in cognitive function for sure, but these improvements will be short lived. Better nootropics stacks are available.

Looking for a better brain supplement?

Looking for a better brain supplement?